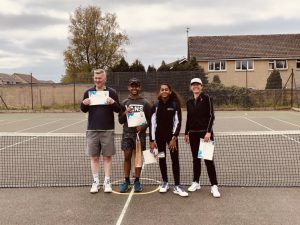 The winners and runners up

Sunday saw the first competition of the season – the Jubilee Mixed Doubles.

Seven pairs entered and there were some close matches from the start, including one which had to be decided by coin toss. 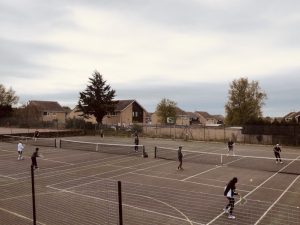 The final saw Masha and Sahan triumph against Tom & Claire in a hard fought match.

Following the competition, everyone stayed for the presentations, which included one to our outgoing Chair, Richard, to say thanks for all of his hard work as he steps down.

The morning was rounded off with the much anticipated Wimbledon ballot.

Congratulations to Sahan, Masha and everyone else who took part in the competition, along with all those who scored Wimbledon tickets.

A huge thanks to Marcus for putting it all together. Look out for our next competition in June.

Take a look at what a membership can offer and join today.

If you'd like to find out more then please feel free to come along to a club session where you will receive a warm welcome from any members of the club.

Alternatively if you have any questions please Please switch on JavaScript to see our email address or fill out our contact form.