Sunday saw our second club competition of the season – the American Mixed Doubles competition. For this competition, people play with a variety of partners keeping their own score to determine the winner. (It’s more straightforward than it sounds.)

There were 14 competitors and lots of tennis was played. 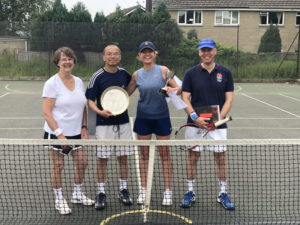 The ladies winner was Claire, while Tak won the men’s. Janet and Nigel narrowly missed out and finished as runners up.

Congratulations to the winners and thanks to all who took part. A contingent continued on to the pub after the tournament for celebratory / commiseratory drinks.

A huge thank you to Marcus for putting the event together as tournament director. Our final club competition 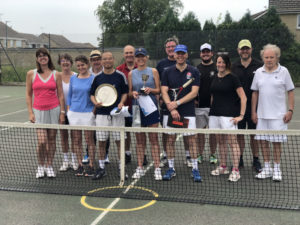 will be in September – look out for details nearer the time.

Finally a reminder that club sessions continue on Monday and Thursday evenings as well as coaching / drills with Steve on Friday evenings. It’s been very pleasing to see such a good turnout so far this year, with a wide variety of abilities represented.

Take a look at what a membership can offer and join today.

If you'd like to find out more then please feel free to come along to a club session where you will receive a warm welcome from any members of the club.

Alternatively if you have any questions please Please switch on JavaScript to see our email address or fill out our contact form.